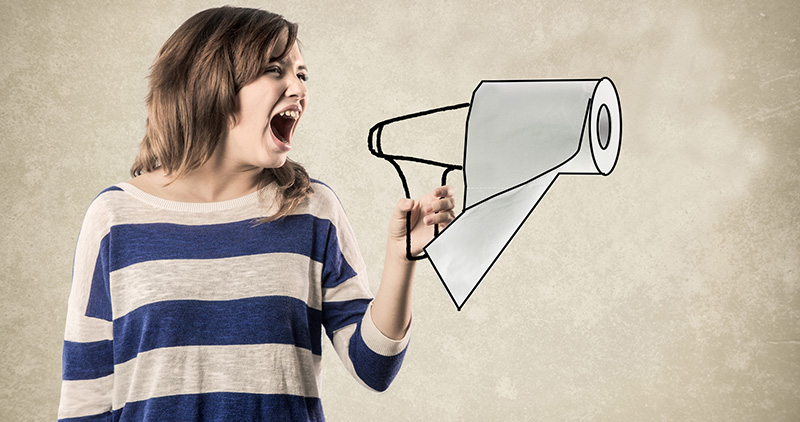 Launching it, using it to improve hygienic conditions, eliminating its supply, distributing it free of charge or removing it from schools. With toilet paper you can not only do politics, you can also make a revolution!

Population is declining and so is the money spent for household purchases, but… toilet paper sales are on the rise. Why? An economic interpretation does not provide many clues, a look at people’s sanitary habits either. So?

To understand this phenomenon, a sociological interpretation is helpful. The scenario described is not hypothetical: we are actually speaking about Japan. After the earthquake in March 2011 that caused a terrible tsunami and the nuclear disaster in Fukushima, toilet paper was in short supply throughout the country. The stock purchases by the Japanese population in the years that followed the earthquake indicate that people were scared and that in the event of an emergency they need those routine gestures that return stability to life.

If, in the case-in-point, toilet paper supplies useful information to those who make policies from the high-backed chairs of government, history (and the theory of revolutions) shows that stopping the supply of toilet paper in a country can constitute a decisive factor in causing upheavals by the masses, just like distributing it free of charge to everyone in equal measure is a captatio benevolentiae for generating goodwill towards leaders, as well as a promotion of healthier lifestyles.

But toilet paper can also be the direct protagonist of protests: launching toilet rolls against protesters is a practice that assimilates the recipient of the launch to related physical needs, with all the implied meanings this entails… Additionally, there are many schools in some areas of the globe where this fundamental hygienic product is chronically absent. In this case, the lack of toilet paper can be equated with a political action aimed at spurring school leaders to find self-financing schemes.

If the future of tissue is comprised of technology, environmental sustainability and product innovation, what will remain inevitably fundamental for a long, long time is the unsuspected power of toilet paper.

PS: In this case, too, Made in Italy creativity teaches, considering that a few years ago, in Naples, toilet rolls printed with the faces of the major Italian politicians were an incredibly fast-selling item. Only recently was this idea replicated also for the political elections in the USA.