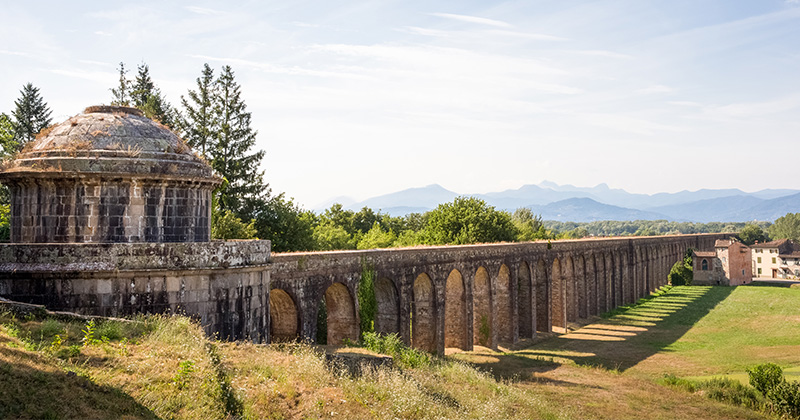 It’s just a few steps from Lucca, the captivating city where architecture and nature merge. Strolling its length is like being in a painting. It is the Aqueduct Nottolini, a work of art as well as a feat of engineering.

Evidence suggests that there has been an aqueduct in Lucca since Roman times. Originally it was probably underground and fed the fountains inside the city walls. When these fountains were lost in the Middle Ages, the need for a new supply of drinkable water became pressing in order to avoid disease or even epidemic. Although there was no lack of studies into viable solutions and plenty of money to pay for them, only in 1822 was the construction of a new aqueduct approved by the then Duchess of Lucca, Maria Teresa di Borbone, who entrusted Royal Architect Lorenzo Nottolini with the project. But the works met with several obstacles along the way, and were only finished in 1851.

12 meters high, the aqueduct stretches for 3 kilometers, with 459 arches in brick and masonry supporting two separate channels running along its summit, for water of better and lesser quality. Spring water was used for the public drinking fountains of Lucca, while water from the Serra Vespaiata reservoir was sent to the monumental fountains. To preserve the integrity of the city walls, the aqueduct does not enter directly inside the city, but ends at the Tempietto di San Concordio, a temple-cistern in neoclassical Doric style where the water was collected and purified.

Today, the Aqueduct Nottolini, intact except for an interruption for the passage of the A11 Firenze-Mare highway, no longer transports water but maintains its symbolic and monumental significance. Le Parole D’Oro, the area of countryside at the foot of the Monti Pisani mountains from which the Aqueduct starts winding its course through Lucca, is a magical place of tradition, nature and architectural beauty. Here, we can breathe in the atmosphere of days gone by to the soundtrack of gently winding waterways, flowing with memories of our ancestors.