The history of tastes through advertising: part II – toilet paper 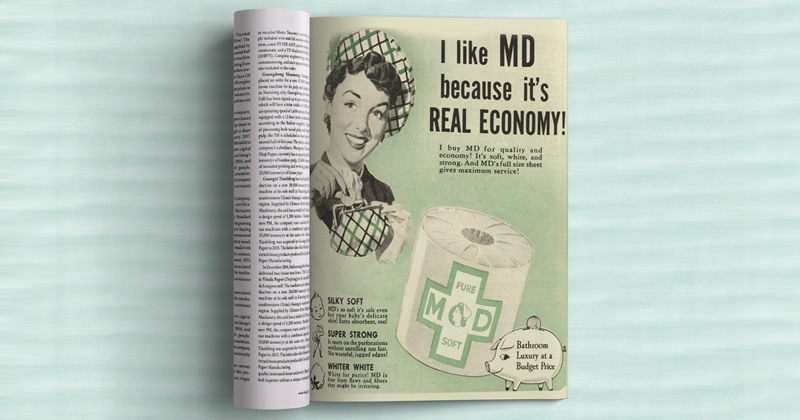 How has advertising tackled the burning issue of “poop”? Here’s a digression that explores the topic: from the beginning, when the subject was practically taboo, to more modern ways of tackling the issue.

Today, medications to keep the bowels “regular” (milk enzymes and laxatives) are among the most widely sold products in Italian pharmacies. In the USA, in 2015 alone, laxatives generated a turnover of $600 million. It is clear that there are some issues around with “poop”! And supporting this notion is the language which surrounds the subject: “innocent” or “obscene” words abound when speaking about the topic, alongside the more technical jargon mainly restricted to the medical profession.

In this context, it is easy to understand how advertising toilet paper is a delicate and risky task. How have various creative minds tackled the issue from the 19th century to the present day? Let’s discover this by taking a journey through the mores and secrecy of the “commode”.

Nineteenth-century approaches were of a medical nature. Gayetty advertised that his paper was purposely called “medicated paper”: at the time, we could only speak of poop in terms of health – understandable as in those years, bad hygiene mores were the basis of epidemics.

The same logic prevailed for “perforated medicated paper” recommended for hemorrhoids (1886). In subsequent decades, Freud would present his theories to the world but at the time, direct references to physiological needs remained off limits. Presenting the product in medical terms was the only way to sell bathroom tissue.

Durability and user-satisfaction were the foundations of Northern Tissue’s advertising in the 1920s whose ad appeared in the prestigious “Life” magazine. The market was beginning to change and toilet paper was by now a common object in daily use. From the creative choices made, we can see how the product was evolving and differentiating itself.

The purity of the paper and focus on female users defined the 1930s approach, including reassuring reference to medical advice.

In 1945, Scott focused on the role of the roll in germs at bay – foretelling the future for facial tissue. Scott actually illustrated the use of a mask made of tissue paper in order to avoid physical and “aerial” contact with the menace of the common cold.

In 1945, Scott focused on the role of the roll in germs at bay – foretelling the future for facial tissue. Scott actually illustrated the use of a mask made of tissue paper in order to avoid physical and “aerial” contact with the menace of the common cold.

With the advent of the Fabulous Fifties (1956 was the year when Elvis Presley’s first album shook up the younger generation), toilet paper advertising saw the smile make its debut, helping toilet paper migrate from remedy against infection to instrument for happiness. Prized textures, convenience, satisfaction and conscientiousness became the key messages. It was early days for this approach rather than a trend, as the “place of shame” and of the unmentionable still remained a topic too delicate to be treated with such levity. The complexity of the issue can be inferred by the fact that only women and children featured in the ads. The macho man of the time was not allowed to have “weaknesses”.

The cold war with its clash between two opposing views of the world, played its part in bring men into the message. Paper as a means to dry the hands started to emerge, with Scott advertising a “thirsty” paper for corporate washrooms, a choice capable of keeping the communist scare at bay: “Is your washroom breeding Bolsheviks? Employees lose respect for a company that fails to provide decent facilities for their comfort”.

The mood of the times was very clear: the scenario showed the polarization of liberalism and communism; man was a worker, the term washroom was used which, unlike the “toilet”, steered clear of bodily functions, and the focus was on the product’s uniquely absorbent characteristics. It illustrated how difficult it still was to speak to the American male about bodily functions. Scott chose to promote its brand via drying rather than wiping to establish corporate positioning without breaching a taboo. One could experience hygiene and satisfaction in general, as long as one chose the right brand.

While the world of the Sixties danced out its revolutions, opening the doors of perception, in Europe toilet paper remained connected to the removal of all that came out of the body, like in this Irish advert promoting a paper containing germicide.

Then came a paper so soft, everyone wants to “squeeze” it to test its softness. With this entertaining narrative began the trade advertising of the 1970s. Charmin was responsible for the change and toilet paper definitively went from being a medical device to an object with many qualities capable of delivering satisfaction.

The Seventies also saw the beginning of the “10 piani di morbidezza” (Italian toilet paper commercial advertising “10 levels of softness”) that in Italy continued for over a decade. These were the years of so-called “austerity” and the convenience of a roll that lasted a long time was certainly an important plus. And advertisers had the intuition to deliver the message with light-heartedness, rather than remind Italians about their loss of purchasing power.

In the hedonistic Eighties, a new attribute makes its appearance: nuances, that – as the advert said – changed the way we saw the bathroom.

In an increasingly competitive market, there were brands which – in order to emphasise the lightness of the product, decided to give away kites: Tenderly.

Today we are witnessing creative solutions unimaginable just a few years ago. And so the rear end of an elephant (clearly an expert on the topic) appears, advertising a product enriched with jojoba lotion. A more casual language style and product differentiation speak clearly about how the cultural and market context has evolved.

At this point, advertisers are on the loose and Italy has reached the point of no return, where the protagonist of this ad is a butt, i.e. the final user of toilet paper. A happily dancing and singing butt because its “owner” only uses Fria Easy moist toilet paper. The issue to resolve is whether we have definitively escaped the embarrassment concerning poop or if this creative choice indicates instead a persistent difficulty in speaking about certain topics, so much so that we must resort to a treatment which borders on the trivial.

In the last few years, Foxy has developed the theme of color begun decades ago by Cottonelle.

But absolute first prize goes to this advert that was published online on April 1st, 2016 by Quilted Northern. Advertising becomes meta-advertising and the producer teases itself. What can we say? – sublime!